Well, September isn’t over, but my experiment with pricing my biopunk novel, Fourwar, on Amazon Kindle at $0.99 is. I reduced the price at the beginning of September, made the requisite announcements on Twitter and my other social networks, and pressed on with my (admittedly light) marketing efforts. Net result? Zero sales, no change from August.

To further my experiment, I’ve decided to go the other way and try a month priced at $4.99 instead. I suspect the price doesn’t really matter if you’re an “unknown” author. I also suspect that, like Robert Sawyer hints on his blog, self publishing is hard in SF generally – whether you take that as “speculative fiction” or “science fiction,” it seems like this stuff is just not going to fly off “virtual” shelves in the same way that a titillating romance novel or a traditional whodunit would. So, more work on marketing for me.:) Unfortunately, I haven’t yet been able to bring myself to spam the fuck out of every blog and forum in existence, so trying to find more organic ways of advertising has been challenging.

In terms of measuring general interest and exposure, I get somewhat confusing results comparing awstats reports to Google Analytics reports on my blog, and the latter can’t track certain things. What I do know is that my own website stats claim that, in September to date, the free PDF version of Fourwar was downloaded 19 times, and my first novel, Alice [free PDF], 10 times. Unfortunately, as I mentioned before, Amazon doesn’t show Kindle page traffic to authors, so you’re out of luck trying to figure out if you’re even being noticed on Amazon if you aren’t actively making sales.

Anyway, the experiment will press on. My third novel, a sort of urban sci-fantasy tale, is sitting at about 50,000 unedited words now, so small progress! I’m hoping to have a finished draft by the end of the year (but I know I said that before). I’m also working on yet-another-edit of Alice, which I’ll then place on the Amazon Kindle store as well as leaving it available under a CC license here.

I’ll close with a couple of very rough-draft thumbnails of images I’m working on – more things that I hope to finish by the end of the year.:) 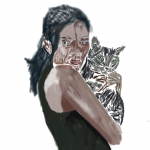