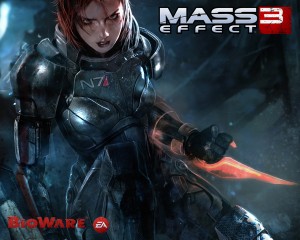 What fascinates me about the ending of ME3 isn’t so much the fan rage (the ending was a blatant rip-off of the Matrix, Deus Ex, Battlestar Galactica, god knows what else) as the fact that reviewers are so intent on pretending that the ending was some sort of literary or artistic triumph and that the fans are just ignorant philistines who should go back to school and learn to appreciate “real” art.

There are two major problems I have with this critical reaction. First, I’ve long been annoyed by a certain streak of “anti-fun” in modern intellectualism as it regards art in general. It’s like an ascetic Protestant streak, some notion that if you’re actually enjoying something it can’t be art, because real art is painful and difficult and anything else is pedestrian junk food for people with low IQs. So a large amount of the reviews of ME3 take the approach that because the end of the game involves suffering and sacrifice and inevitability (and really, not much fun at all) that it is “higher” art than if it had a heroic, happy ending. “It’s more true to life,” they claim, and so it’s more valuable, more “authentic.” This is the same to me as rejecting anything other than photorealism in painting, because it’s more “authentic” (although you might as well just take a photograph and save the effort instead of trying for a tromp l’oeil effect). Happiness, joy, and beauty are not invalid topics in art. Trying to create a world just so you can destroy everything good in it doesn’t make you “edgy” or give you extra intellectual brownie points — it just makes you a dick. (Sorry, G.R.R. Martin / Game of Thrones fans.)

The second thing that really bothers me is that most games are not static forms of art, and especially not role-playing games. The draw of an RPG has always been to customize your character and interact with the world and make it your own, then play again with a different character and experience it through another set of eyes. The reviewers who laud the designers’ choices for their supposed artistic integrity and “refusal to bow to the least common denominator” while bashing the fans as “failing to get it” or “trying to steal control from the artists” are entirely missing the point. ME3 isn’t a movie or a book that requests you to sit back and experience a sequence of events that were laid out in advance by a creator or team, with no input. It promises to allow you to influence the story, to come out at divergent points with different characters and to explore possibilities as much as narrative. By presenting essentially a single ending (the three are not sufficiently different to require multiple playthroughs to experience) over which you have no real control, it’s almost as if a media switch has been pulled underneath you as the player. You’re watching a movie, and then suddenly you’re…reading a book. Or you’re listening to music, and suddenly someone is reading out the notation – “A-flat above middle C, F above middle C, B-flat below middle C.” Or you’re watching a play, and suddenly everyone stops moving and you’re looking at a still-life that never resumes. The point is, any of these experiences would be jarring for someone expecting a certain experience.

I realize that this type of dissonance is a valid subject for art to explore, but I think that it would be absurd to think that it would go over well with mainstream audiences who have purchased the work with specific expectations — ones that were encouraged and advertised by the company selling it. It’s not even that it’s invalid in any “moral” sense for EA/BioWare to do this, just that it’s bad business sense because it’s effectively a type of bait-and-switch where people were purchasing entertainment and got complicated “intellectualism”^ instead. If you burn your customers, they won’t come back.

This isn’t the first time we’ve seen this, of course. The Matrix trilogy comes to mind, and I think it’s not surprising that the first movie is by far considered the best. Critics will try to say that fans didn’t react so badly to that ending (with the Architect nonsense), but they also had less investment. As a movie viewer, you go into a theater knowing full well that you might not get an ending that you like. As a gamer playing a genre RPG, you have certain expectations that at least one ending will probably be something you can jump on board. Mass Effect 3 gave us nothing but an exercise in artistic dissonance that will please people who want to feel like they’ve achieved something noble by suffering through yet another round of artistic self-flagellation. For everyone else, it’s just a let-down.

^Edit: I should note that I’m not against making people think. Thinking is good for you. Just don’t expect people to like it when they show up to your techno thriller film and you slap them in the face and tell them to RTFM because they don’t know how to compile a kernel. 😉