I’ve been making slow progress at various projects, primarily trying to fix some bugs in my Brainsucking Mutants game and contemplating a paper doll system (pixel art) for it. I’m not sure if I’ll manage, but I have a few random (not very good, as you’ll see) pixel art doodles to prove that I haven’t been wasting all of my spare time playing Civilization… >_> 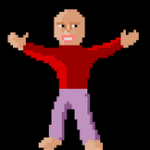 Just a little note that if you need to prevent near-plane clipping while moving the camera into your volume, there seems to be a simple way to achieve this effect (in OpenGL): simply enable GL_DEPTH_CLAMP while rendering the front and back faces of the bounding volume you are casting from. There may be a better way to do this, but this seems to work and with no noticeable performance loss.

It’s been a couple of weeks since I posted, so just thought I’d let everyone know what I’m up to.

I’ve finally gotten back on the writing roll, pushing 45,000 words on my current writing project – a second novel. It’s a sci-fi novel, a bit cyber-punk maybe, with a lot of action. The basic premise? Three cultures colliding in one future city, and the human body itself the first front in an inevitable war. Overall, quite different from my first story. Have I titled it yet? No, but as soon as I come up with a title I’ll announce it here.

I’m seriously considering trying to publish the second novel officially, and from what I read online, publishing it on my website will make that process more difficult. If you want to read some of it, email me and I’ll send you enough to whet your interest.

My Earth:2025 rewrite is still in progress. I’ve made some minor changes in the code and am still working with a buddy to get a server up for an alpha run of the game. The first time through will be pretty vanilla, but some major gameplay changes definitely possible – as well as extensive community modding, which I think would be a first for this type of game.

Look out for more stories to come in my writing section, and one closet [comedic] drama which might be posted as well.

If you’re an Earth: 2025 player, you might be interested to know that I’m remaking the game. There have been a number of problems with it that have gone unrepaired despite player complaints, so I’ve always wanted to address them. The idea has been on the back burner for a few years, and I’m finally getting around to doing it.

While I’m starting out with a straight clone, a few potential changes – some with code in place – are:

Other things are in the works, but always first things first, right? I’ll post updates as I go, so feel free to check in here!